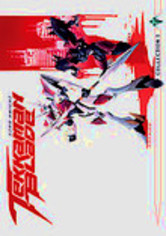 1992 NR 3 discs
In the future, the countries of Earth have united to explore the universe. But when the planet is suddenly attacked by an alien race of insects that overwhelms the humans and destroys cities with toxic spores, the mission becomes one of survival. Mankind's only hope is a former alien lieutenant who sets out to defeat the invaders. This 15-episode collection of the sci-fi anime also includes a featurette on the history of the series.