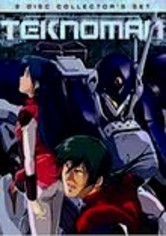 1996 NR 2 discs
The year is 2087, and a group of powerful biochemical creatures known as the Venomoids is threatening to take over planet Earth in this popular anime series from Japan. In these episodes, it's up to Nick Carter (aka "Danger Boy") -- a superpowered biotech warrior himself -- to join forces with the Space Knights to save humanity and thwart the Venomoids, whose ranks include members of his family.