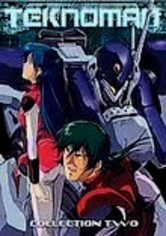 1996 NR 2 discs
The second collection of episodes from the "Teknoman" anime TV series finds the battle between the human-backed Space Knights and the Venomoids' Teknomen progressing at a dangerous rate. With the rapidly depleting squad of Space Knights growing weaker by the minute, they're forced to call on the Teknosuits for help. But if the special combat armor fails, the Venomoids could win supremacy of the universe.