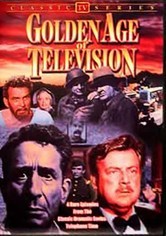 1948 NR 2h 0m DVD
Television's Golden Age returns in four episodes of Bell's "Telephone Time." Victor Jory stars in "I Am Not Alone" as a Polish prisoner subjected to the brutality of a Soviet prison. Walter Coy is "Man with a Beard," whose choice of facial hair tragically divides his neighborhood. "Recipe for Success" finds the inventor of the Crepe Suzette dishing with actress Sandra Bernhard. And "The Mountain That Moved" profiles a massive engineering feat.