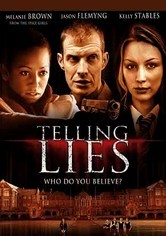 2006 NR 1h 21m DVD
To arouse her ex-boyfriend's jealousy, high schooler Faith (Jenna Harrison) and her best friend, Eve (Kelly Stables), invent a new beau for Faith named Vincent. But their prank has terrible repercussions when Faith is arrested for the murder of the supposedly imaginary Vincent. Desperate to prove her innocence, Faith goes on the run to uncover the truth behind the baffling mystery. Melanie Brown (formerly Scary Spice) and Jason Flemyng co-star.