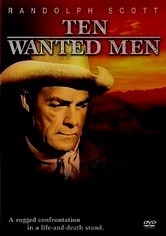 1955 NR 1h 19m DVD
Forthright Arizona cattle rancher John Stewart (Randolph Scott) must protect his expansive property from a ruthless villain in this classic Western. Stewart's rival, Wick Campbell (Richard Boone), is a cutthroat competitor who stops at nothing in his attempts to drive out anyone he sees as a threat. Now, Campbell's hired gunfighter Frank Scavo (Leo Gordon) and a posse of outlaws to make sure Stewart knows who's boss.