Ten9Eight: Shoot for the Moon 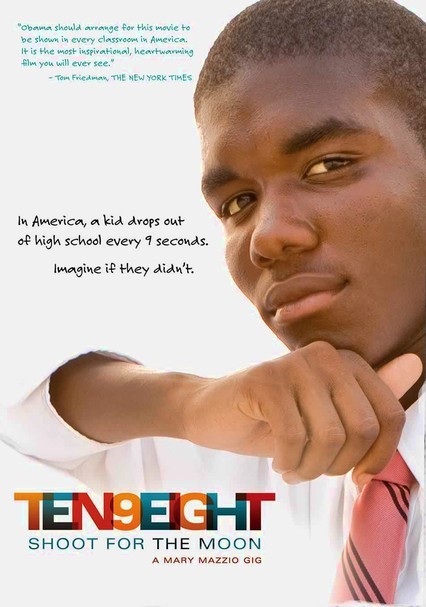 Ten9Eight: Shoot for the Moon

2009 NR 1h 25m DVD
In filmmaker Mary Mazzio's inspiring documentary, young inner-city students -- entrepreneurs -- discuss their harrowing lives and the numerous obstacles they've overcome as they compete to take home a $10,000 grant to start a business. The diverse group of creative, enthusiastic and determined teens is followed closely as they participate in a prestigious competition hosted by the Network for Teaching Entrepreneurship.

Parents need to know that this documentary about inner-city teens participating in a national business plan competition offers lots of positive messages about staying in school, working hard, setting goals, and reaching for dreams. It also introduces business entrepreneurship as an alternative to violence, criminal activity, and/or drug abuse. The young contestants' personal stories deal with violence, addiction, molestation, and absentee parents, but all of these tough topics are addressed within the context of positive narratives about overcoming obstacles.

Some contestants discuss teen sex, pregnancy, and birth control. One talks about becoming a teen father. Condoms are briefly visible.

The contestants briefly talk about the violent neighborhoods they lived in and the number of friends and family who died as a result. The documentary asserts that a large number of high school dropouts end up dead at a young age. Men are shown being incarcerated. One contestant discusses being sexually molested by a family member.

The documentary presents entrepreneurship as an alternative to dropping out of school and other risky behavior. Although some of the teens are motivated by greed, overall the movie has positive messages about working hard, reaching for goals, and empowering yourself to overcome obstacles and be successful. The film also acts as an advocate for educators.

The logos of corporate sponsors -- including AOL and Chase Bank -- appear. The judges are CEOs of major corporations like Nantucket Nectars, Oppenheimer Funds, and Home Depot. The film acts as a promotional vehicle for the NFTE Business Education Program.

Many of the contestants are attempting to stay away from drugs while coping with the addictions of their parents and/or other family members. Drug dealing is discussed as a negative activity.