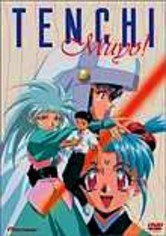 1992 NR 4 discs
In this popular Japanese anime series, Tenchi goes against his grandfather's admonitions and ventures into a temple inside a cave, allowing a horrifying mummy to escape -- one entrapped by his father centuries before. It seems, however, that the mummy is actually Ryoko, a space pirate who's the first of a line of mysterious female aliens to visit Tenchi.