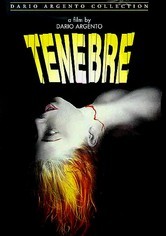 1982 NR 1h 41m DVD
Shortly after American mystery novelist Peter Neal (Anthony Franciosa) lands in Rome on a book tour, a rash of grisly murders -- patterned after the slayings in his new novel -- sweep the city. With the police scratching their heads, Neal launches his own investigation. Veronica Lario portrays Neal's ex-lover and John Saxon plays his publicist in this twisty giallo shocker from Italian horror-meister Dario Argento.