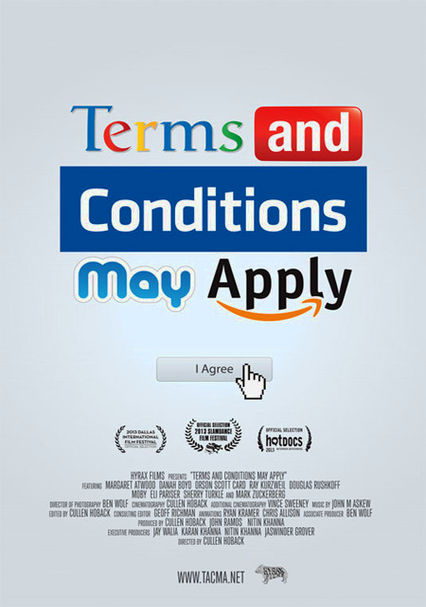 2013 NR 1h 20m DVD
Through interviews with technology thought leaders and futurists -- including Mark Zuckerberg, Orson Scott Card and Margaret Atwood -- this timely documentary examines the erosion of privacy in the digital age.

Parents need to know that Terms and Conditions May Apply is an eye-opening documentary about the way that various online companies -- be they e-commerce sites, Internet service providers, search engines, or social media networks -- collect, store, and share their users' personal information, thanks to those long and usually unread terms of service agreements. There's occasional racy content and strong language (in text) shown on the screen, as well as blurry photos of people on Facebook or Twitter, but otherwise, this is an informative (and frightening!) documentary about consumers' digital footprints and how your every keystroke could one day be used against you. It's great family viewing for parents and tweens/teens who want to be safe, smart digital citizens.

Quick shots of provocative tweets and Facebook status updates about one-night stands, threesomes, hooking up, and other "TMI" topics.

A man describes how he was refused entry into the United States, questioned for hours, and pushed around by the authorities because of a tweet.

Strong language isn't said but is shown in screen grabs, including "f--k," "s--t," and more.

Various experts encourage consumers not to be passive about the ubiquitous terms of service that digital companies require you to agree to when you sign up. The filmmaker wants audiences to know their rights as digital consumers -- and the way that companies change their terms of service to benefit them and share users' personal data.

One of the interviewees (a hacker) holds an unlit cigarette but doesn't smoke it.