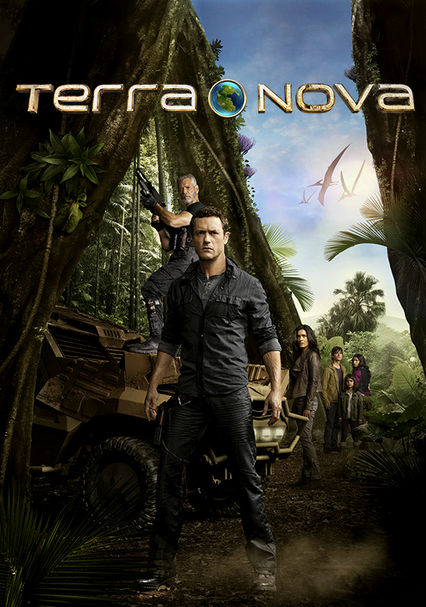 2011 NR 1 season
In this sci-fi drama series, the Shannon family travels with other settlers from the scorched Earth of the 22nd century to the prehistoric past, where they establish a colony to give humanity a second chance at survival.

A family living in the year 2149, an era when Earth is dying, travels 85 million years back in time to a prehistoric colony called Terra Nova, where a band of intrepid explorers and scientists attempt to give human civilization a new lease on life.

Parents need to know that this sci-fi drama drives home positive messages about the importance of family and working together, with a focus on both teen and adult characters. That said, there's regular violence (including shootings and bloody dinosaur attacks) that's likely too intense for younger viewers. You'll also hear low-level cursing -- from "damn" to "son of a bitch" -- and see a little light romance. There usually isn't much in terms of drinking, but in one episode, teens make moonshine and drink it, only to learn a valuable lesson.

Some light kissing, caressing. Some romantic tension. Hints at sexual activity between a married couple. Potential for romance between teens.

Some blood and sudden violence. A few characters carry weapons (guns, tasers, etc.), either for security/protection or to assault other people. The new world also houses meat-eating dinosaurs that attack and kill humans.

Both the old and new worlds are filled with problems, hinting that humanity is inherently flawed. But the ideals of Terra Nova seek to reverse the greed, war, and ignorance that destroyed planet Earth. Other important values in the new world include family, collectivism, and, to some extent, environmentalism/conservation.

In one episode, teens make their own moonshine and drink it, but there are negative consequences to their actions. Rare social drinking among adults.