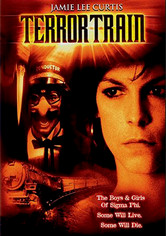 1980 R 1h 37m DVD
A fraternity prank goes wrong and lands one student in a mental institution. Four years later, when his frat brothers host a costume party on a train to celebrate their graduation, the student sees this as his opportunity to exact revenge. He sneaks on the train and begins killing the partygoers one at a time, masking himself in the costumes of his victims. Will anyone make it off the train alive? Features Jamie Lee Curtis and David Copperfield.