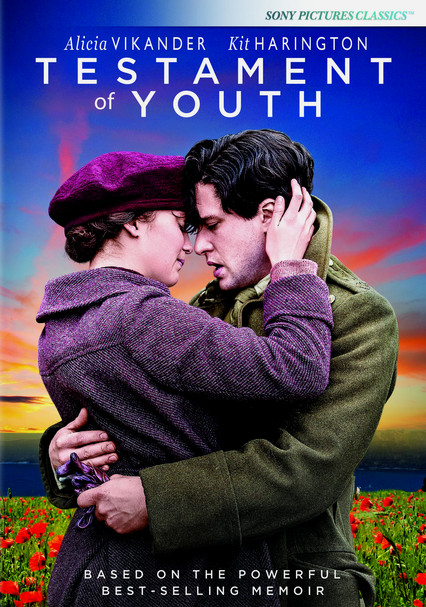 2015 PG-13 2h 10m Blu-ray / DVD
In this adaptation of her World War I memoir, smart and ambitious Vera Brittain breaks free of her conservative home life to attend Oxford University, but news of war soon brings her studies and a blossoming romance to a halt.

Parents need to know that Testament of Youth is a historical drama based on Vera Brittain's same-titled memoir about being young during World War I. The story of her life as an aspiring Oxford student, bride-to-be, and battlefield nurse is both heartrending and violent. It shows the horror of trench warfare -- young men bloodied and missing limbs, blind, and in various stages of injury -- and many characters die, some in terrible pain, bleeding, and calling for loved ones. Expect some drinking and historically accurate smoking, but there's no sexual content aside from a few passionate kisses between Vera (Alicia Vikander) and her beau/fiance. And the language is tame ("bloody," "sod off"), so it's really just the violence that will determine whether your teen is ready to see this war drama/romance.

A couple flirts, stares longingly at each other, writes each other poems, and shares a few passionate kisses, one time lying down on the grass and caressing each other.

Several intense sequences set in battlefield/military hospitals; soldiers are bleeding, missing limbs, and in various stages of injury and illness. Many characters die, all due to war injuries. Moments when nurses are covered in blood while tending to a dying man or cleaning a man's waste. Scenes of devastating grief.

Conveys the importance of higher education for women, the way war changes people forever, and the universal truth that war, no matter how noble, leads to death and the loss of a generation of young soldiers.

Frequent smoking (accurate for the time period). Adults drink and toast in restaurants and on Armistice Day.