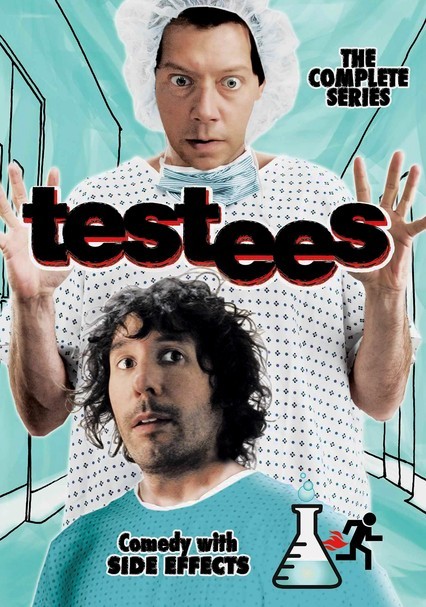 2008 NR 2 discs
As human guinea pigs for experimental medications, treatments and products, best buds and roomies Peter (Steve Markle) and Ron (Jeff Kassel) must frequently battle bizarre side effects -- such as pregnancy, memory loss and paralysis -- that make their lives miserable. In Season 1 of this comedy series, the guys test out several powerful gadgets, such as a military-grade vacuum cleaner and electric chastity belts.

Parents need to know that this crass sitcom depends heavily on bodily functions for humor. The main characters make their living testing experimental drugs, which cause a broad range of unusual side effects (extreme flatulence, penis enlargement, male lactation, and more), and their discomfort is played for laughs. There's a fair amount of sex -- and even more discussion about sex, genitalia, and bodily functions, with some salty language. There are brief flashes of nudity during some of the medical procedures, and some scenes show people going to the bathroom. In addition to taking lots of experimental drugs, characters are often shown drinking.

Some sex, with people shown under the covers in bed. No nudity during the sex scenes. But the testees are shown partially clothed during some medical procedures; there are brief glimpses of their backsides when experimental drugs are inserted into their rectums, along with some discussion about the nature of the procedure. Lots of talk about sex, including rather explicit discussions of genitalia. One character tests a "penis enlargement spray" and frequently discusses the results. He also flashes a female character, and they excitedly discuss his newfound endowment. Another character is shown urinating, with the stream flowing all over the bathroom.

Some salty language, including "screw you," "wieners," "schlongs," and "wanking" (accompanied by hand gestures); when a couple is in bed, they talk about "going down" on a woman and "coming." The name of the show, Testees, and the company where the characters work, Testico, are both intentionally suggestive.

The environment at Testico, where the testees are employed evaluating experimental drugs, is very hierarchical. The doctors seem to have little compassion for their test subjects and blithely ignore any discomfort, either when the medicine is administered or from the subsequent side-effects. The subjects routinely suffer a broad range of unpleasant side-effects -- indeed, that's the point of the show. The show doesn't explicitly address class implications, but the testees are young, underemployed slackers who seem willing (though often somewhat reluctantly) to rent their bodies to the medical industry in exchange for easy money. Some scenes are extremely demeaning. One man forces others to lick his feet when they're groveling for jobs. A woman forces a man to wear a bag on his head when they have sex, suggesting she only wants to sleep with him because of his medically enhanced, extremely large penis.

The whole premise of this show revolves around taking experimental drugs, though there's no recreational drug use. Characters often drink at home or in bars.