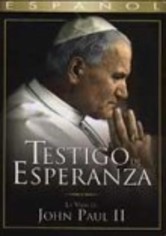 2005 G 1h 55m DVD
Relying on rare historical stills, archival film and original location footage shot in Rome and Poland, this Spanish-language documentary chronicles the personal life and struggles of Pope John Paul II, aka Karol Wojtyla, the first non-Italian to be elected pontiff in more than 450 years. The film, which originally aired on American public television under the title Witness to Hope, is based on the book by George Weigel.