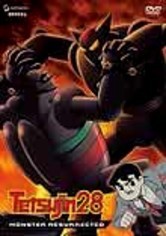 1963 NR 6 discs
At the height of World War II, a Japanese inventor built a warrior robot called Tetsujin-28, designed to fight the Allied forces invading his country. But after a serious bombing campaign, both the robot and its creator disappeared. Now, some years later, the inventor's son unearths his father's creation and must use it to save Tokyo from the evil robot Black Ox. But will the boy be able to pilot such a large-scale fighting machine?