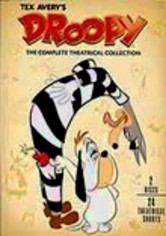 1943 NR 2 discs
The deadpan, slow-moving Droopy Dog was one of animator Tex Avery's most indelible characters. This collection features all 24 of Droopy's theatrical cartoons, in which his unassuming personality gets him out of one nasty situation after another. First produced and screened between 1943 and 1958, the shorts in this compilation have been painstakingly restored from original prints. Bonus features include a documentary retrospective and gag reel.