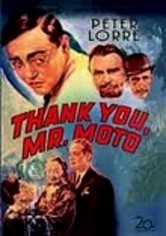 1937 NR 1h 9m DVD
Detective Moto (Peter Lorre) comes into possession of an ancient scroll worth a fortune in this second film based on J.P. Marquand's novels. The Japanese investigator evades ruthless villains as he tries to deliver the missing scroll to a royal Chinese family (Philip Ahn, Pauline Frederick), completing a set that will reveal the location of Genghis Khan's treasure. But the bad guys get the royals first, and Mr. Moto winds up in dangerous waters.