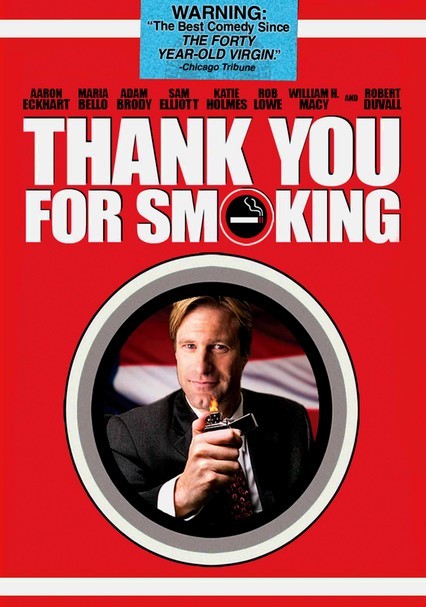 2005 R 1h 31m DVD
On a mission to make the country forget the dangers of smoking, Big Tobacco spin doctor Nick Naylor promotes his product in the movies and hushes those who bad-mouth cigarettes, all the while trying to remain a role model to his young son.

Parents need to know that this film includes frequent use of the f-word (over 20 times). Lobbyists discuss their devious tactics and corrupt employers (firearms, alcohol, and Big Tobacco), comparing death tolls, diseases (fetal alcohol syndrome, cancer), and gruesome inspirations (the gun lobbyist was moved by the shootings at Kent State). Nick is kidnapped and covered with nicotine patches, landing in the hospital. Characters do not smoke on screen, but they do drink occasionally. Characters discuss sex and lust using slang; one sex scene. A primary theme suggests that lobbying is a form of lying to sell product and ideas.

Bobby Jay's childhood flashback shows him with a firearm (he also describes his inspiration to support the NRA was hearing about the Kent State shootings; he wanted to be able to "shoot students"); TV image shows baby seal killed by whale; Sands of Iwo Jima scene shows John Wayne shot; Nick violently kidnapped and assaulted with nicotine patches.

Frequent use of the f-word (over 20 instances); multiple s-words, as well as "crotch," "ass," "assh--e," "damn," and "hell," and several slang references to male genitals and female body parts.

Lobbyist defends his job as "talking for a living," arguing that he is only encouraging people to "think for themselves," but he is selling smoking; other members of the MOD squad discuss their selling of alcohol and firearms, noting the numbers who die from use of these products; senators are corrupt, as are the tobacco executives, and the reporter sleeps with Nick to get her story.

Though all about the cigarette industry and lobbying, the film shows no smoking; characters drink in restaurant; the senator keeps liquor in his desk; the captain drinks mint juleps; jokey references to drugs (crack, Colombian dealer); Nick is hospitalized following an overdose of anti-smoking nicotine patches.