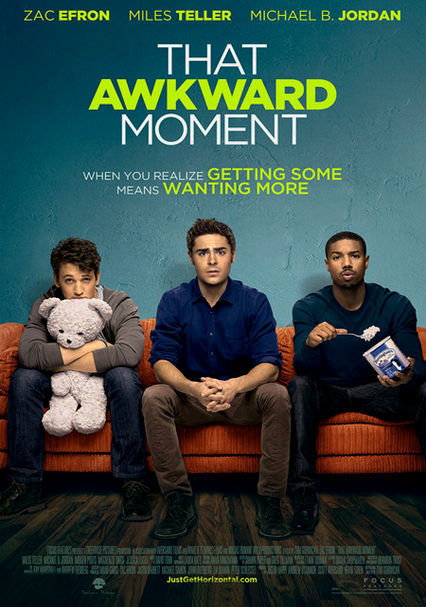 2014 R 1h 34m Blu-ray / DVD
When Jason's relationship crumbles, his three best friends decide to show their solidarity by staying single until he's ready to get back in the game. But the pact is put to the test when fate presents all three with their ideal ladies.

Parents need to know that the comedy That Awkward Moment follows three twenty-something best friends who vow to just hook up and not get involved with anyone in order to stay single together. Although stars Zac Efron, Miles Teller, and Michael B. Jordan are known for previously starring in teen-friendly fare, this is a mature post-college sex comedy that while not graphic in its depiction of sex, is still incredibly risque. There's near-constant strong language ("f--k," "s--t," "a--hole," "pussy," "cock," "dick," etc.), and several sex scenes that show sides of breasts, butts, and bare shoulders, and women in bras and panties. The movie's message is that relationships require work, acknowledgement, and commitment.

Lots of discussion of casual sex and a "hook-up roster" of women the guys will have sex with but not date seriously. Several sex scenes that show the sides of butts and breasts, or women in their bras and panties. A married woman commits adultery, a man walks in on his friend having sex.

The movie's main message is that relationships mean being there for someone else when they're going through tough times, not just happy times.

The three guys drink a lot -- at home, at parties, and during their bar outings.