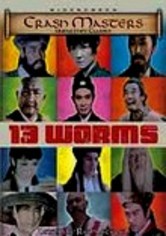 1970 NR 1h 37m DVD
A ragtag bunch of fighters called the 13 Worms lose a wager to a man known as the Saint of Chess. In order to repay the chess master, the Worms agree to take on a dangerous mission that requires them to find and rescue a captive princess. Along the way, they face a series of tough ordeals, including being double crossed. This classic kung fu film entertains with loads of madcap adventures, comic mishaps and unlikely escapades.