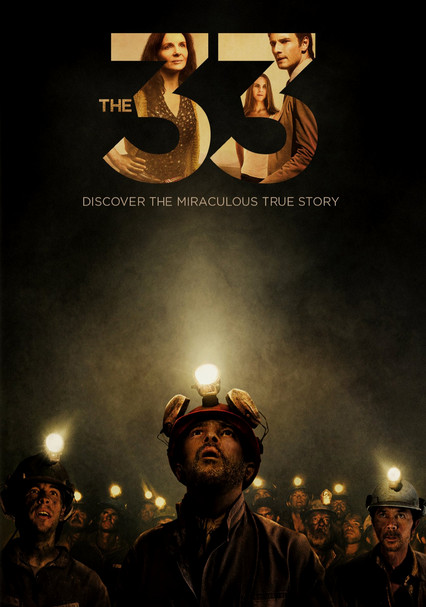 2015 PG-13 2h 7m Blu-ray / DVD
Unspooling one of the most compelling true-life tales of survival in the modern age, this gripping drama chronicles the massive 69-day effort to rescue 33 Chilean miners who were trapped more than 2,000 feet underground.

DramaForeign DramasDramas Based on Real Life

Parents need to know that The 33 is the intense but inspiring true story of 33 Chilean miners who were trapped underground for more than two months. The collapse of the mine is portrayed in a very tense, scary, loud sequence; later, there are several scenes of interpersonal conflict (which could upset some kids) as miners struggle to survive with little food and water and as worried loved ones angrily press the government to rescue the trapped men. One character is an alcoholic who goes through detox while underground. Language is infrequent but does include a few uses of "s--t," plus other words. Despite the serious subject matter, the movie has strong themes of support, teamwork, faith against the odds, and persistence, and tweens and up may find the dignity with which most characters conduct themselves uplifting.

A husband and wife embrace. A miner is kidded because his mistress lives right near the house he shares with his wife.

The depiction of the mine collapse is loud, scary, and realistic, with strong tension/peril, and tons of rocks shifting, falling, and crashing. Men fight as they grow edgier from hunger and fear. The sister of a trapped miner hits a government minister when it first seems no rescue effort will possible. Many scenes of interpersonal conflict.

Strong themes of support, teamwork, believing in yourself, faith against the odds, and persistence/not giving up. Despite the massive odds against them, the miners managed to stay civil and supportive. Above ground, their loved ones vigilantly pressed the government to launch the costly effort needed to rescue them.

An alcoholic brings a flask into the mine during working hours. He later goes through a painful detoxification while trapped.