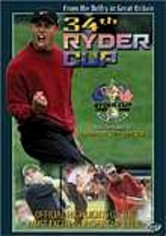 2002 NR 2h 20m DVD
The 34th annual Ryder Cup was set to be a heated match after the American team mounted an improbable comeback in 1999 to claim the coveted cup. European captain Sam Torrence and his cohorts hosted the Americans, led by captain Curtis Strange, at The DeVere Belfrey in Sutton Coldfield, England, for what proved to be an exceptionally exciting tournament.