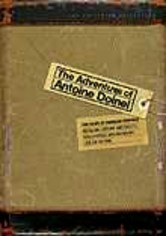 1959 NR 2h 9m DVD
This pairing includes François Truffaut's first feature film, The 400 Blows, as well as the haunting short film "Antoine and Colette," which originally appeared in the film anthology "Love at Twenty." The 400 Blows stars Jean-Pierre Léaud as 13-year-old Antoine Doinel, who runs away from school and his difficult family -- but finds it even tougher living on the streets of Paris and must resort to committing petty crimes.