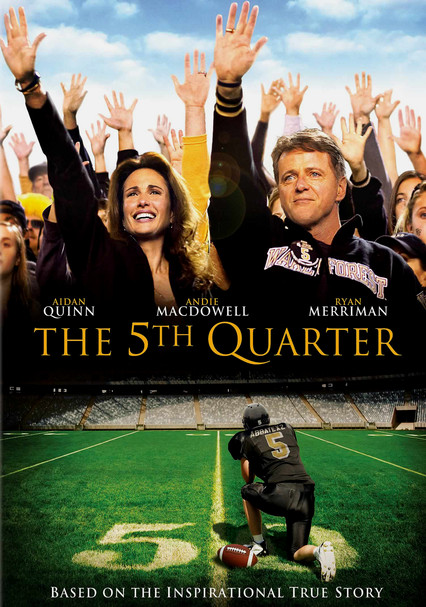 2010 PG 1h 30m Blu-ray / DVD
In the wake of a car crash that killed his 15-year-old brother, Luke, football player Jon Abbate returns to Wake Forest University with renewed purpose and leads his struggling team to its most successful season ever.

Parents need to know that The 5th Quarter is a true story about a family and football team who come together in the aftermath of the tragic death of a 15-year-old boy due to reckless teenage driving. Although it's ultimately an inspirational story, much of the first half of the movie shows the emotional devastation experienced by a family after the death of a loved one: scenes in the hospital and at the funeral and subsequent scenes in which family members try to cope with their loss. These scenes might be a bit much for younger or more sensitive viewers. There also is some profanity ("s--t") and alcohol abuse, although the movie makes it clear that drinking to forget one's problems isn't effective. Overall the movie shows the power of family, faith, friendship, and football to help ease the tremendous difficulty of untimely death, and the film also shows the positive benefits of organ donation -- not only for the recipients of the needed organs but also for the families who agree to donate the organs of their beloved deceased.

Tame insinuations about a teenage girl "wanting" a teen boy "in every way."

After a car accident, teenagers are shown injured and bleeding. One of the boys is shown in a hospital bed, bleeding and unconscious.

This movie shows the power of determination, prayer, faith, and teamwork -- within families, friends, and football teams -- as a family grieves over the untimely death of their teenage son due to reckless driving. This film also shows the profoundly positive impact organ donation has, not only on those who need and receive organs but also for those families who donate the organs of lost loved ones.

Characters are shown drinking beer, wine, and tequila. Drunk characters -- including a college student -- act intoxicated but suffer the consequences of their actions in the form of peers showing concern and telling them to stop. A college student and football player turns to drinking in the aftermath of his younger brother's death but is shown by his friends and a personal trainer that drinking will not ease his suffering.