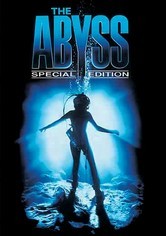 1989 PG-13 2h 51m DVD
When a nuclear submarine sinks, a team of divers descends the depths to determine the cause in this sci-fi thriller from writer-director James Cameron. But during the investigation, it becomes evident that an extraterrestrial power is at work. Led by Bud Brigman (Ed Harris), the crew includes Brigman's estranged wife (Mary Elizabeth Mastrantonio) and a paranoid Navy lieutenant (Michael Biehn). The film scored an Oscar for Best Visual Effects.

Parents need to know that there's a fair amount of salty language in this ocean thriller. The camera exposes bare breasts in a medical-emergency context. Violent acts include death by drowning, hand-to-hand combat, and a threat of nuclear annihilation. Young viewers with fears of the water and/or claustrophobia might be uncomfortable with vivid portrayals of drowning and submersible environments. A scene -- not faked -- in which a domesticated rat is immersed in breathable liquid is a real don't-try-this-with-the-family-pet-at-home moment. The US military doesn't come off looking particularly good.

Quick glimpse of bare breasts as a female character in cardiac arrest is defibrillated.

Blood shed in hand-to-hand combat and near-strangulation. Freshly-drowned bodies shown. A knife and a gun brandished. A montage of real-life atrocity footage from Vietnam, the Holocaust, and other infamies. A psycho character slashes his arm in a masochistic "cutting" ritual.

The U.S. military (in particular, an all-white group of overconfident Navy SEALS) are more or less the villains here, arrogant and paranoid and fixated on weaponry and Cold-War destruction. The filmmakers' sympathies are with the (ethnically and sexually mixed) working-class oil-rig crew, shown as more sensible and concerned for each other's safety and well-being. The main characters are a feuding couple in the process of divorce, with lots of marital sniping woven into the adventure; the wife in particular is accused of being more interested in career advancement.

Somehow a Coca-Cola machine found its way on board the base.