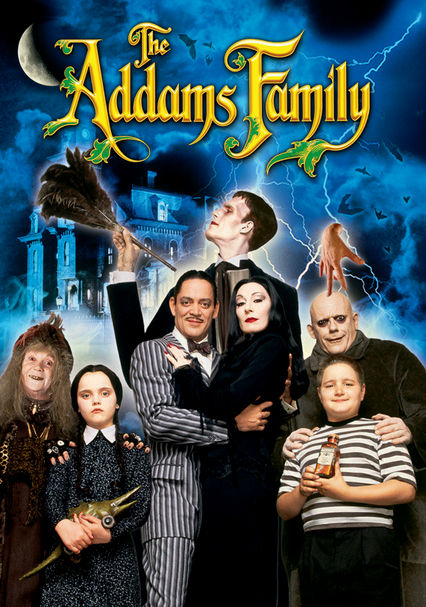 1991 PG-13 1h 39m DVD
Stepping out of the pages of Charles Addams' cartoons and the 1960s television series, the beloved macabre family takes to the big screen in a tale that centers on con artists out to swindle them by introducing a bogus Uncle Fester into their home.

Parents need to know that while this film is based on the classic 1960s sitcom, it's a much darker comedy with more sophisticated humor. While the movie is fun, it contains violent images and strong sexual innuendo. It also contains scenes featuring the use of various weapons and torture devices. Parents also need to know that while the characters are likeable, their behavior is sometimes mean spirited. Wednesday Addams' sadistic nature is rather disturbing. Parents should exercise caution and may want to preview before allowing tweens to watch.

Strong sexual innuendo, especially between Gomez and Morticia. The couple can be heard having an orgasm while in public. There are several subtle references to sadomasochism, and a quick reference to child molestation relating to Uncle Fester. Much of this will go over the head of young viewers.

Knives, swords, and other medieval weapons are frequently visible, but their use is rarely seen; a torture device is used on Morticia (to her pleasure), and Pugsley is strapped into an electric chair. A hand gun is visibly pointed at Gomez. The children, especially Wednesday, use weapons and other sources of pain to try to hurt each other as part of their everyday play. In the end no one gets hurt (although it's unclear if the bad guys are dead at the end).

There's a clear love of family and love for children. But some of the Addamses' antics appear mean-spirited.