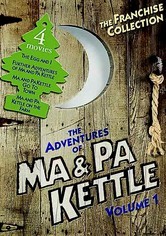 1947 G 2 discs
Percy Kilbride and Marjorie Main are the titular Kettles in this collection of four feature films based on the folksy, homespun series that was popular in the late 1940s and early '50s. Follow the humorous adventures (such as finding uranium in the backyard and winning a model home) of this eccentric hillbilly couple living in a rundown shack with 14 of their 15 children. Included is The Egg and I, for which Main received a Best Supporting Actress nod.