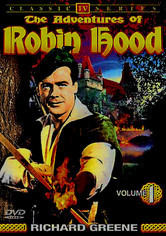 1955 NR 17 discs
Dashing actor Richard Greene stars as the fabled Robin Hood in this British adventure series that ran from 1955-58. The show follows the daring exploits of Robin of Locksley, enemy of evil Prince John and a loyal servant to King Richard the Lionhearted. With the virtuous monarch away fighting the crusades, Robin and his band of merry men protect innocent citizens from power-hungry aristocrats and the dastardly Sheriff of Nottingham.