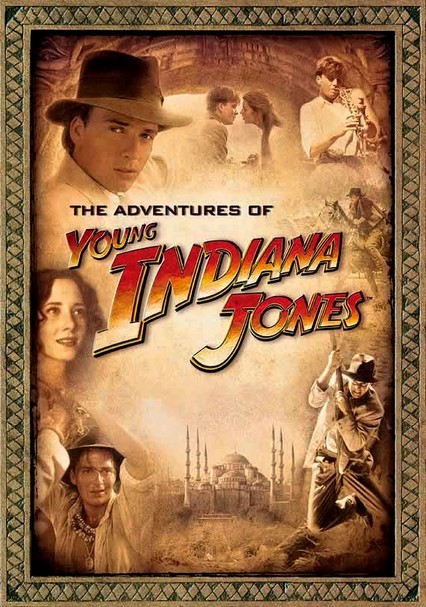 1992 TV-PG 3 seasons
Excavate the childhood of everybody's favorite archaeologist with this Emmy-winning, TV series spinoff of the hit movie franchise, alternately starring Sean Patrick Flanery and Corey Carrier as the juvenile Indiana Jones. As young Indy travels the globe in search of adventure and artifacts, he crosses paths with some of the early 20th century's most notable (and notorious) personalities, including Thomas Edison, Al Capone and Lawrence of Arabia.

Sean Patrick Flanery and Corey Carrier take turns playing out the thrilling adventures of a young Indiana Jones in this first volume of critically acclaimed television episodes from the creative mind of George Lucas. While accompanying his father (Lloyd Owen) in Egypt, Indy discovers two bodies -- one mummified and one fresh -- and enlists the help of the legendary Lawrence of Arabia (Joseph Bennett) to solve the mystery.

Sean Patrick Flanery returns as the small-screen incarnation of iconic adventurer Indiana Jones in this globetrotting series (created by the legendary George Lucas) that deftly blends early 20th-century history with exotic intrigue. As Indy resumes his trek across the world in search of ancient artifacts, he finds himself in the midst of one exciting escapade after another, often crossing paths with key historical figures.

Parents need to know that this show isn't just a TV version of the immensely popular Indiana Jones movies -- although, like the films, the series features plenty of excitement as young Indy pursues adventure (and sometimes romance) around the world; there's plenty of action (including fights with weapons); and the series does a decent job of emulating the films' mix of thrill-a-minute drama and light comedy. But with the show's stronger focus on Indy's involvement in historical events and interactions with major historical characters, there's less of a feeling of wall-to-wall escapades. The fight scenes are less polished, and the plots are sometimes thinly developed. But, on the flip side, there's more time for Indy to discuss important ideas about politics, love, friendship, and life.

Ever the romantic, Indy finds someone to woo in almost every episode that follows him as a teenager/young man -- though passionate kissing is generally the most that's shown on screen. There's no sex or nudity, though the show hints at some off-screen dalliances.

Plenty of action, though less than the big-screen movies. Indy's adventures always seem to include encounters with dangerous villains and often lead to fights of all kinds -- fist, gun, knife, sword, etc. Some of these battles are quite intense, and some characters die on screen, but there's little blood or gore. A good portion of the series takes place during World War I, so there are many battle scenes featuring machine guns, bombs, and other types of mechanized combat. Again, many injuries and some deaths, but little gore.

Plenty of words like "darn" and "rats," as well as the occasional "damn," but not much stronger language.

Indy's adventures typically place him in opposition to some rival -- whether they're both on the hunt for some kind of ancient artifact or on different sides of a battlefield -- and generally try to paint the other side as the "bad" side. But the show sometimes gives short shrift to explaining why these opponents are actually in the wrong; just because another adventurer is seeking the same prize as our hero, he's not necessarily a villain. Some early 20th-century conflicts are clearly seen from the Western point of view, which seems to automatically assume that the European or American forces are the good guys, while rebellious ethnic tribesmen must be the bad guys. Failing to explain the larger background of these conflicts does a disservice to viewers, especially younger ones, who may get a skewed perspective of history. That said, one of the joys of this show is watching Indy interact with an extensive roster of important historical characters, ranging from a young Ernest Hemingway to T.E. Lawrence.

Plenty of social drinking, and teenage/young man Indy sometimes drinks until he and his pals are falling-down drunk, which is portrayed for laughs. Some characters smoke.