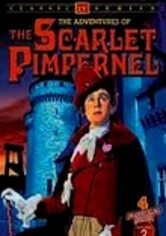 1955 NR 1h 44m DVD
Based on Baroness Orczy's novel, this classic British series follows the adventures of a French Revolution-era masked hero who rescues innocent victims from the guillotine. Living as dandified English diplomat Sir Percy Blakeney (Marius Goring) by day, he becomes the courageous Scarlet Pimpernel once the sun goes down. Episodes are "Antoine and Antoinette," "The Sword of Justice," "The Elusive Chauvelein" and "The Hostage."