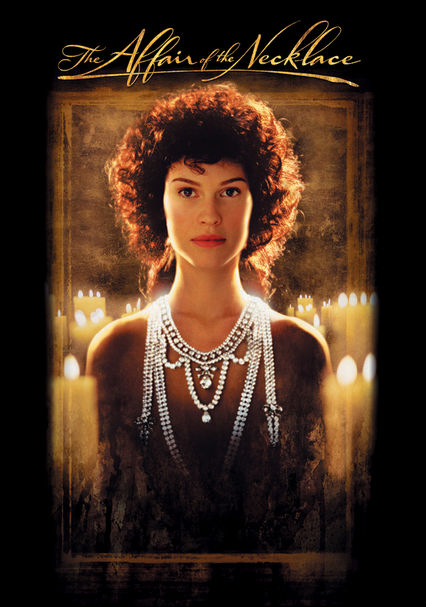 2001 R 1h 57m DVD
When she and her family have their royal titles stripped by the crown, 18th-century French countess Jeanne de la Motte Valois (Hilary Swank) schemes with her lover (Simon Baker), her husband (Adrien Brody) and a mysterious Italian count (Christopher Walken) to obtain a diamond necklace worth millions. Joely Richardson co-stars as French queen Marie Antoinette in this period drama that earned an Oscar nod for its lavish costumes.

Parents need to know that there is brief female toplessness in what looks like a drug-sodden aristocratic orgy. The (unhappily married) heroine tries to have sex with her boyfriend; later her husband does the same with an actress. Violence includes shooting, beating, and kicking, soldiers executing a man, and a public whipping, branding, and execution by guillotine, though the filmmakers refrain from plunging us into all the ugly details; it's mostly quick MTV-style edits. One character is a corrupt, sexually active Catholic cardinal. Kids making the real-life Jeanne de la Motte-Valois their school-report heroine should know that historians (and even earlier movie adaptations) regard her negatively -- a dodgy con-artist, rather than the romanticized avenger admired here.

Lots of cleavage-baring fashions and push-up corsets, with a quick shot of toplessness in a languid, drunken orgy-type atmosphere. The heroine is not very faithful in her marriage (nor is her husband). She strips down in shadow for sex with her new lover, but their act is interrupted. A clergyman with a corrupt reputation appears to try to force her into oral sex.

One character shot (in an embarrassing place). Others are threatened with bullets or evisceration by knife. Quick, impressionist scenes of violence include soldiers battering through a house, beating, kicking, and killing residents; a whipping and a branding with a hot poker; and a grim procession to the guillotine for a condemned prisoner being executed. These are shown in quick bursts, without graphic bloodshed, though there's no doubt what's going on.

The script makes a heroine out of Jeanne and justifies her lies, forgeries, and impostures as a means of getting back what was stolen from her -- though how her scheme is supposed to really do that gets lost in the intrigue. In the trial finale the various conspirators are judged and punished for their crimes, and it's hard not to agree with the sentences (even if the filmmakers obviously don't). A Catholic cardinal is a sex-mad hypocrite. Marital fidelity doesn't mean much here.

No brand names, but diamonds are fondled lovingly and often.

Hookah-style pipes in what appears to be an 18th-century drug party. Social and private bon-vivant drinking.