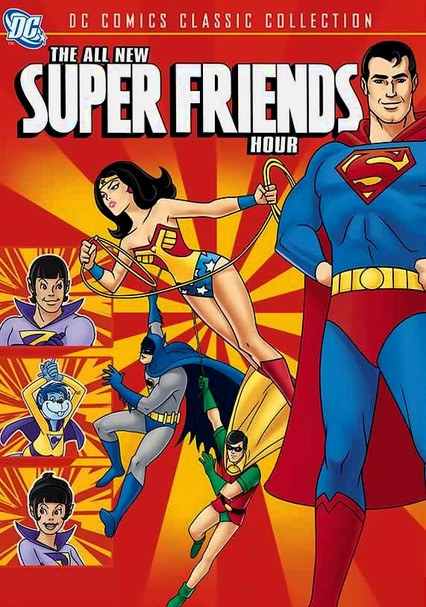 1977 TV-Y7 2 seasons
This 1970s animated series brings together a bonanza of superheroes, ranging from Superman to Wonder Woman and the newly created Wonder Twins, to battle the universe's most diabolical villains, including Mr. Mxyzptlk, an alien gunslinger and Dracula.

One superhero is powerful enough. But when several superheroes -- including Superman, Batman and Robin, Wonder Woman and Aquaman -- team up to fight the world's worst villains, they're practically unstoppable. Highlights in the first season of this wildly successful animated series from the 1970s include guest appearances from Hawkman and Hawkgirl, as well as the debut of the purple-clad Wonder Twins -- Zan and Jayna.

Batman, Robin, Superman and Wonder Woman join forces once again to put evil in its place -- with help from their trusty squad of Super Friends, of course -- in this concluding volume of first-season adventures from "The All-New Super Friends Hour." Highlights include appearances by the Green Lantern, the Flash, the Wonder Twins and Aquaman, plus battles against man beasts, a mummy, a giant squid and killer bees.