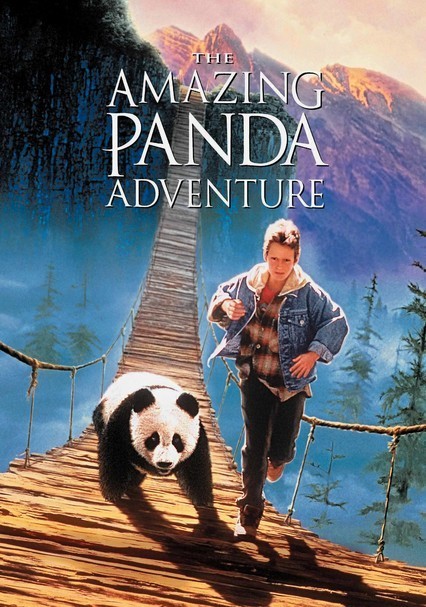 1995 PG 1h 31m DVD
In this children's adventure story, a young boy (Ryan Slater) is in China visiting his father (Stephen Lang), who is helping to save pandas in their habitats. While out on the preserve, father and son are separated when poachers attack. With a baby panda in tow, the young boy must make his way through the wilderness to safety.

Parents need to know that this live-action animal adventure, which follows a young American boy who ends up saving a panda cub, features some mild peril and threatening villians. The 10-year-old protagonist and his friend, a Chinese girl, face realistic panda poachers on several occasions and plummet dangerously into a river, as well as evade gun-wielding criminals as they attempt to travel back to safety. Kids will learn about pandas, Chinese folklore, and the unconditional nature of father-son relationships.

Ling and Ryan flirt with each other and in one scene end up having to strip down to their underwear to get leeches off of their bodies. They then hide from each other, and Tyler makes a joke about how he's seen "naked girls" before on cable TV, so she shouldn't worry about him peeking.

In several scenes, the poachers look menacingly at the nature preserve workers. They skulk around with guns and scowls and cage a mother panda. They then kidnap a panda cub. The two kids fall in the river and down a waterfall a few times, but each time they manage to escape scratch-free. The poachers find the kids and panda and try to catch them, but the kids evade them thanks to sympathetic villagers.

Positive messages include the idea that fathers love sons unconditionally, even if they have to work a lot; the environmental lesson that there are animals nearing extinction and it's our collective duty to help save them; and that even young kids can make a big difference.

Brief references to the show American Gladiators and to Twinkies.