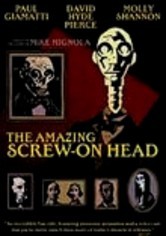 Parents need to know that the title character in this animated sci-fi series is indeed nothing but a head. Leaving aside the fact that it's rather improbable that a mechanical head would prove a successful super spy (this is science fiction, after all), it's more than a little odd to see Screw-On Head in action. The show also dabbles in black magic, vampires, and demons, which might be scary for young children.

A fair amount of combat, including guns, knives, fists, explosives, and even giant robots and demons.

Screw-On Head serves as a loyal agent of President Lincoln and is aided by his own fiercely dedicated manservant in his ongoing battle against the notorious Emperor Zombie and his undead minions. As such, the show plays out as a basic campaign between good and evil, with good trying to outweigh the devious forces of evil.