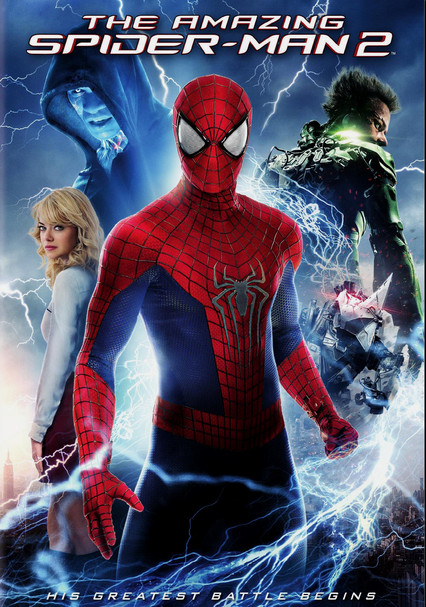 2014 PG-13 2h 22m Blu-ray / DVD
Spider-Man squares off against the Rhino and the powerful Electro while struggling to keep his promise to leave Gwen Stacey out of his dangerous life. Meanwhile, an old friend resurfaces, and Peter Parker uncovers new clues about his past.

Parents need to know that The Amazing Spider-Man 2, starring Andrew Garfield and Emma Stone, is the second movie in the latest Spider-Man franchise and will appeal to superhero-loving tweens and teens. Like most superhero-based action flicks, there's lots of city-wide violence and destruction of property (some of which is notably more intense when viewed in 3-D). While the crash-and-bang scenes may not scare experienced movie-going kids, there are some emotional deaths that are sad and upsetting for all ages, particularly to anyone who isn't familiar with the Spidey storyline. There's no drinking or sex to speak of (although Garfield and Stone have a strong chemistry that translates into a few passionate kisses) and very little language ("damn," "hell," etc.), so if your teen or mature tween Webslinger fan can handle the violence, they should be ready for this latest adventure.

A few kisses, embraces, and declarations of love.

Most of the violence is on a large scale: cop cars pile up, people are shot at, and Manhattan landmarks, including Times Square, tumble down -- but people don't seem to actually die or bleed, just get injured and run away. When seen in 3-D, some of these scenes feel more intense. There are a few upsetting deaths, particularly of people who love Peter Parker. Those scenes are the most disturbing. Spider-Man's run-ins with Rhino, Electro, and the Green Goblin result in violence, but only one has lasting impact on Peter or the audience. The scenes in which the Green Goblin transforms suggest that it's a very painful process.

Language is infrequent and limited to "damn," "hell," and "oh my God."

The movie has several worthy messages, but the biggest is simple: Hold on to hope, and instill hope in others whenever you're able. Peter struggles with his responsibilities as Spider-Man, but he's reminded of his desire to offer help to the people of New York.

There's a tie-in between Spider-Man and a whole host of merchandise: the comic book source material, games, apparel, figures, video games, and much more. As for product placements, all of the electronics in the movie are made by Sony.