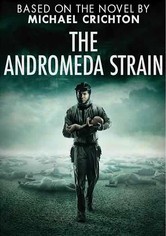 2008 NR 2 discs
When a satellite carrying a deadly alien virus crash-lands in the Arizona desert and quickly kills almost every resident of a nearby town, a team of scientists rushes to the site to find a cure before the pathogen can spread. But their only clues are an old man and an infant, both of whom survived the outbreak. This Emmy-nominated miniseries starring Benjamin Bratt is a remake of the classic 1971 film based on Michael Crichton's novel.