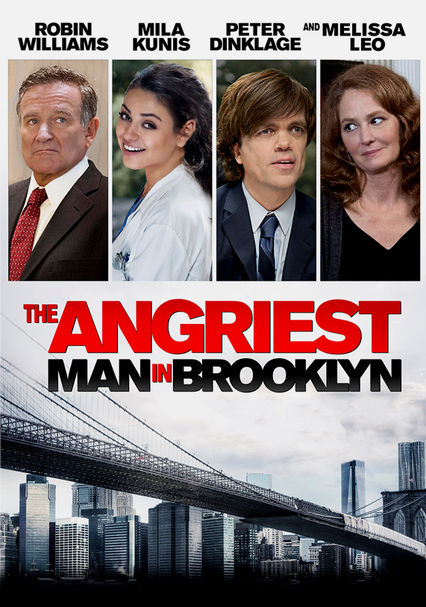 2014 R 1h 23m Blu-ray / DVD
Informed that he has a brain aneurysm and only 90 minutes left to live, bad-tempered Brooklynite Henry Altmann embarks on a frenzied excursion all over town to mend fences with everyone he's alienated.

Parents need to know that while The Angriest Man in Brooklyn is centered on a worthwhile message -- pay attention to what matters in life before it's too late -- it's ultimately an anxious, exhausting viewing experience. Much of that is thanks to the constant strong language; it's angry, frustrated swearing that includes "f--k," "s--t," and much more. A major character pops pills to deal with stress, and characters accuse her of being stoned. She also has fairly graphic sex with her boss; while no nudity is on display, the sounds and positioning make it very risque. There are also some car chases, death, and suicide attempts. But the movie could still spark discussions about what's really important and what you would do if you only had 90 minutes left.

One brief but graphic sex scene, with a woman leaning over in the foreground and a man thrusting behind. The man makes "climaxing" noises at the end. No nudity is shown during this scene. A character talks extensively about making love to his wife, with references to "getting it up," though nothing is shown. Oral sex is referenced; additional sex talk. A man's wife admits to having an affair with another man.

Almost constant shouting, raging, and arguing. A man is diagnosed with a brain aneurysm and has only a short time to live. There's a car crash and two high-speed car chases. In flashback, a man gets the news that his oldest son has died. A man jumps off the Brooklyn Bridge in a suicide attempt. A cat jumps out a window and is said to have died. A man is sprayed with mace.

The message is very clear: We neglect too many things in our lives until we realize that it's all going to end. The movie gets you to think about what's most important, what would you do, and who would you spend time with if you only had 90 minutes left.

One of the major characters has a pill problem. The pills she takes are unidentified, but she takes them to feel high and to deal with stress at work. Several characters accuse her of being high. Later she's seen drinking from a glass of wine.