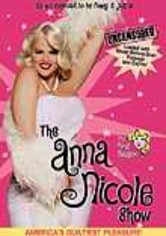 2002 TV-14 3 discs
Former Guess jeans model (and, later, tabloid regular) Anna Nicole Smith is at once vexing and vixen-like in this introductory season of the oddly compelling reality show broadcast on E! that follows her travails as a single girl on the make, mother of one and Hollywood celebrity. Her companions, Howard K. Stern (the lawyer, not the shock jock) and Kim (an assistant who worships the ground Anna walks on), complete the unusual cast of characters.