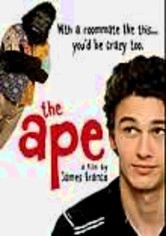 2005 NR 1h 32m DVD
In this indie comedy, family man Harry Walker (James Franco) -- determined to write the next great American novel -- leaves his job as a corporate scrub, moves out of his house and rents an apartment to help him focus. But when he unexpectedly discovers he has a roommate -- a trash-talking gorilla with an affinity for Hawaiian shirts -- Harry's plans go down the drain. Brian Lally portrays the scatological simian.