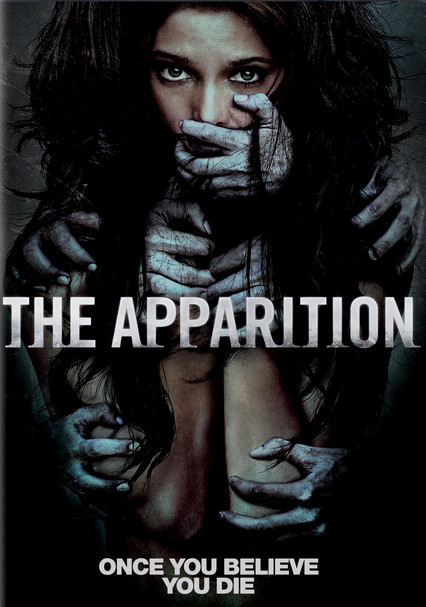 2012 PG-13 1h 22m Blu-ray / DVD
When a series of disturbing events begin disrupting their home life, Kelly and Ben realize that they aren't alone. Aided by a paranormal expert, the desperate young couple attempts to exorcise their supernatural tormentor and save themselves.

Parents need to know that The Apparition is a haunted house movie with more scary stuff like noises, lights, shadowy figures, and unseen forces attacking the characters than actual blood. The movie focuses on a boyfriend/girlfriend couple (the latter is played by Ashley Greene from the Twilight movies), and they're shown sleeping in the same bed and walking around in their underwear. The girl takes a shower, but nothing sensitive is shown. Swearing includes several uses of "s--t" and "hell" but is otherwise mild. Teen horror fanatics may be interested, despite the film's general lack of story/quality.

The movie focuses on a loving boyfriend/girlfriend couple. They tease each other and kiss. They're shown sleeping in the same bed, and they fall asleep cuddling on the couch. They're both shown in their underwear. The girl takes a shower in one scene. No nudity is shown, but she's viewed through an opaque shower curtain, and there are out-of-focus shots from inside the shower. A character uses a video camera to jokingly film a girl's behind.

Much more creepy scary stuff than blood. There are loud, scary noises, and characters are attacked by unseen forces. A woman is nearly suffocated by her bed sheets. Characters are dragged through walls into dark nothingness. Creepy ghosts appear briefly in the corners of the frame. A dog dies. Characters play a violent video game in a brief scene.

Characters try to solve a problem but fail; no lessons are learned. A main character chooses to lie to his companion in an effort to protect her. He later sees this as a mistake, but he's not given the opportunity to change or grow.

Products shown include Apple computers and iPhones and Corona beer. A Pepsi logo, a Mountain Dew logo, and a Volkswagen logo are also glimpsed. Some scenes take place in a huge, Costco-like "box store."

Characters occasionally drink beer (Corona) in a background way. A character announces "I need a beer" after losing a video game.