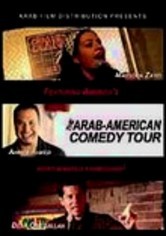 2006 NR 1h 35m DVD
Three of the nation's hottest Arab-American comedians -- Ahmed Ahmed, Dean Obeidallah and Maysoon Zayid -- manage to find the humor in a host of things that aren't inherently funny, including Arab stereotypes, religious zealotry and racial profiling in the wake of Sept. 11. This hilarious collection of stand-up performances was filmed on location in Seattle and Dearborn, Mich., home to one of the largest Arab communities in the United States.