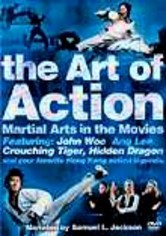 2002 NR 1h 36m DVD
Hosted by Samuel L. Jackson, this in-depth documentary offers viewers a behind-the-scenes look at the history of the martial arts film -- from the genre's rebellious beginnings to high-flying modern epics. Jackson takes you through the best moments of 100 movies, including Charlie's Angels and Oscar winner Crouching Tiger, Hidden Dragon. Interviews with martial arts film veterans Sammo Hung, John Woo and Ang Lee round out the video.