The Art of Conducting: Legendary Conductors of a Golden Era 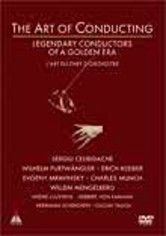 The Art of Conducting: Legendary Conductors of a Golden Era

1996 NR 1h 55m DVD
Anyone interested in the major conductors of the 20th century will be fascinated by this documentary, which chronicles six world-renowned maestri, including Evgeny Mravinsky, Charles Munch and Sergui Celibidache. This film also features commentary by record producers and orchestra players, along with rare footage of the conductors that gives insight into each of their progressions, both in age and accomplishment.