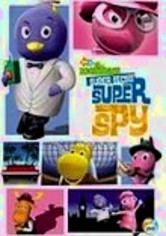 2004 NR 1h 37m DVD
Join the Backyardigans as they go undercover for three supersecret episodes. Uniqua, Pablo, Tyrone, Tasha and Austin take on secret identities, solve mysteries and elude the bad guys with lots of musical fun along the way. Special guest Cyndi Lauper joins the gang for their globe-trotting adventures in this hit show from Nick Jr.

Parents need to know that this DVD is a sweet and funny tale suitable for young viewers, following a super spy on his mission to keep three mysterious containers out of a very mild villain's clutches. Lots of songs and even more dancing characterize the action, and even direct tension between the good and bad characters is defused with admirable politeness. For extremely ticklish kids, the scenes of the tickle chairs may be off-putting (though the only character who is actually subjected to it is, it turns out, not ticklish.)

Refreshingly absent, though tickling is a threat.

Simple message that even the youngest viewer will catch on to: it's better to be good than bad.