The Backyardigans: The Snow Fort 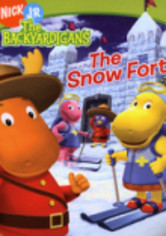 The Backyardigans: The Snow Fort

2005 NR 1h 38m DVD
Join friends Uniqua, Pablo, Tyrone, Tasha and Austin for some wintertime fun in this four-episode collection of the musical adventure series for preschoolers, in which the back yard transforms into a magical land of wintry make-believe. The pals search for the Yeti of the Frozen North, defend their snow fort and make some daring rescues as members of the Ski Patrol. Also included are two bonus episodes and music videos.