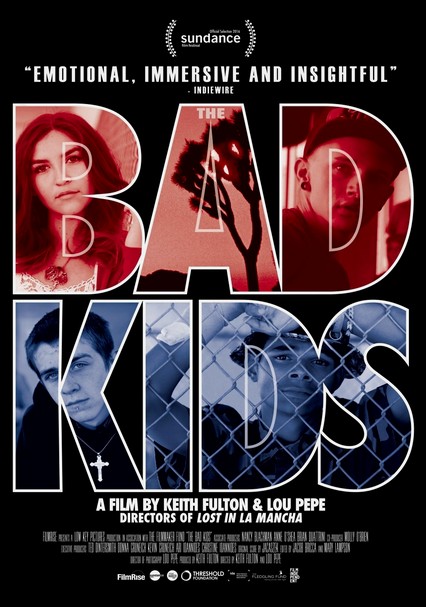 2016 NR 1h 41m DVD
Standing behind the belief that there are no bad kids just bad circumstances, the staff at Black Rock High School in the Mojave Desert goes the extra mile to help students, as detailed in this sobering documentary that focuses on three at-risk teens.

Parents need to know that The Bad Kids is a moving documentary about troubled high school students and the special school in California's Mojave Desert region that may be their last chance. The film follows a few of them through the course of a year as they try to overcome the many hurdles in their difficult lives, and some parts can be wrenching to watch, even though ultimately the message centers on compassion and perseverance. Despite a fair bit of profanity (mostly "f--k" and "s--t"), this is a good film for parents to watch with teens and may prompt some discussion about the challenges of growing up.

Tense arguments between parents and children.

The teens learn that they can succeed, even against long odds, if they persevere. Sometimes having just one person care about you can make all the difference. But there are no easy or fast fixes for hard situations, either.

A few well-known brands are seen on screen, including Pepsi and Sony, but they're captured as part of the documentary process, rather than as promotion.

Discussion about a student whose mother takes drugs -- and who later starts using himself.