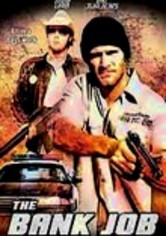 2007 NR 1h 16m DVD
Just as smalltime crook Kenny (Brad Jurjens) gets out of the slammer, he hooks up with his partner in crime Brandon (Johann Urb) to rob a bank. They steal a nearby Mustang as their getaway car but they're in for more than they burglarized for when they open the trunk. Eventually, a drug lord, Arab terrorists and a corrupt FBI agent get involved, which means plenty of shoot-outs, car chases and high-adrenaline action in this Jurjens-directed film.