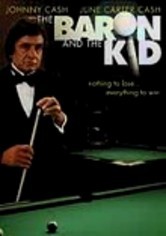 1984 NR 1h 34m DVD
Johnny Cash heads the cast in this sentimental drama, which follows a famed pool hustler (Cash) whose reunion with his long-lost son (Greg Webb) sets the stage for a series of adventures as they join forces to open a pool hall. Based on a hit song written by Cash, the film also stars Richard Roundtree, Tracy Pollan, June Carter Cash and Darren McGavin. The Cash family patriarch performs on the soundtrack.