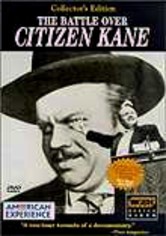 1996 NR 1h 53m DVD
Directors Michael Epstein and Thomas Lennon reveal the real story behind the production of Orson Welles's masterpiece Citizen Kane, a film that was very nearly quashed by its thinly veiled subject, William Randolph Hearst. Drawing on archival footage and clips from Citizen Kane, as well as interviews with journalists, historians and filmmakers, the documentary sheds new light on a cinematic classic.